Showing posts from December, 2010
Show All

- December 14, 2010
SoundCloud Audio by Abigail Mathias
A travel piece on Turkey that also featured on the mygola blog...http://www.mygola.com/blog/?p=97

Music holds the key to my soul. When it comes to a live music concert, I’m usually pretty kicked to attend. Hitching a train from Bombay to Bangalore for a Roger Waters’ concert with a bunch of office colleagues, including my boss, is certainly a memory I’m waiting to relate to my kids.


Eight years and two children later, one of the biggest acts in music history and certainly in my book, were headed this way.

Of course a few people thought I was insane to take a five-month-old baby on a vacation. What they didn’t understand was that I needed the holiday…
Post a Comment
Read more

The battle of the bulge By Abigail Mathias 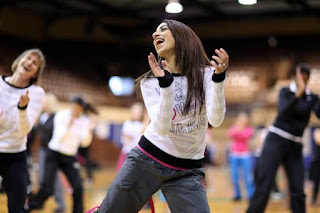 I took my first Zumba class just two months after my second baby was born. It was time to face the outside world and shed the excess weight. I first heard about Zumba from my sister who attended classes in Canada. The idea was intriguing – burning 600 calories in one hour at a workout that’s aimed at being fun. I couldn’t wait to start.

According to the official website; Zumba fuses hypnotic Latin rhythms and easy-to-follow moves to create a one-of-a-kind fitness program. It was first conceived by celebrity fitness trainer Beto Perez in the late 1990s and soon gained popularity worldwide.

It is probably no coincidence that my Zumba instructor, Amani Abassy has a permanent glow on her face. She’s a self-confessed Zumba addict who is constantly motivating her students and urging newcomers to give the class a try.

“I started my first class in 2008 when Zumba was relatively unheard of in the Middle East,” says Amani. The growing popularity of her classes in Kuwait is obvious from …
Post a Comment
Read more
More posts